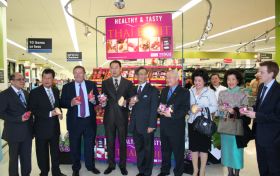 To mark the introduction of a new range of Thai exotics to its shelves, UK retail giant Tesco today welcomed a delegation from Thailand to its flagship store in London’s Kensington to view the new in-store promotional campaign first-hand.

Following a tour of the store and tastings of the new products, Tesco chairman David Reid said he hoped that this was “the start of a new initiative to vastly increase the volume of produce from Thailand in all our stores across the country”.

New products available at Tesco, sourced direct from the growers and promoted under the slogan "Thai Fruit: Healthy & Tasty", include dragonfruit, lychees, mangoes and rambutans, but others could soon be on their way, according to Mr Reid.

“This is just the beginning,” he said. “We will be discussing things like airfreight costs and quality control, and then I expect there to be many more Thai products in our stores.”

Sunthorn Arunanondchai, of Thai hypermarket chain Tesco Lotus, added: “Hopefully we will be able to send over our mangosteen and longan in the near future. In all my experience, this `Tesco` is the best company to be working with.”

The UK ambassador of Thailand, Kitty Wasinondh, seconded this statement. “I believe Tesco is well placed to promote not just the UK in Thailand, but also Thailand in the UK,” he said.

Jonathan Sutton, Tesco Lotus’s category technical manager for fresh produce, stated his belief that it was crucial to have the support of the politicians for such an initiative to work.

“We cannot do this all on our own,” he told Fruitnet.com, “but with the support of both countries’ leaders we can do so much more. This is a great opportunity. Thailand is a big producer, of products like baby corn, chillies, lemongrass and ginger, which at the moment Tesco is sourcing from places like Africa and India.”

Asked if there was any concern that the current recession could put UK consumers off such exotic products, Mr Sutton responded: “Generally, everything is being affected by the crisis, but by sourcing direct, we can cut costs and keep revenues up for the growers.”