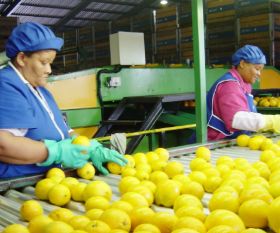 South African (RSA) citrus exporters are shifting their attention to Asia for the second half of their season as prices fall in Europe.

Mounting competition in UK, Russian and European citrus markets is dulling demand for RSA fruit and pushing down previously high prices, industry pundits report, forcing exporters to look elsewhere for decent returns. “In this environment, the markets in the East will again play a crucial role in the returns to growers,” Katope’s Max le Roux told Fruitnet.

Up to now, RSA shippers had diverted most of their export crop away from Asia and the US to strong euro and pound sterling markets. Consequently RSA navel and grapefruit exports to Asia are down on last year. Valencia volumes, though, are expected to buck the trend, with strong sales expected in China.

By the end of week 26, South Africa had packed 39m cartons of its forecast 89m-carton total export crop. “There is a feeling that grapefruit exports may be less than anticipated. Soft citrus may also be under pressure to reach the 7.4m carton estimate,” Citrus Growers Association Justin Chadwick said. “Lemons are within sight of the 8.1m carton estimate, and a navel export crop of 18.7m cartons is still on the cards.”

Meanwhile, the Australian navel industry has made a promising start to the season in Japan, exporters report. “Due to the strength of the Australian dollar, many grower-packers are diverting fruit from the US and committing greater volumes to Japan this season,” said Delica’s Murray McCallum. “We expect to increase our volumes to Japan by 40-50 per cent.”

The South Australian Riverland, which is recognised as fruit-fly-free by Japan, dominates Australian exports to the country, as the other regions must cold treat their fruit. Citrus growers in the Sunraysia were hoping to gain seasonal fruit-fly area freedom status from Japan by mid-July, but Tokyo has told them they will need to wait until next year.