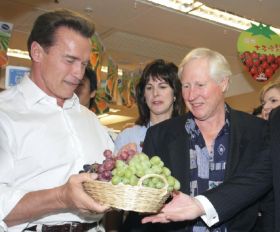 California table grapes are the doyen of dessert grapes as far as Asian consumers are concerned: that is to say (according to California Table Grape Commission – CTGC – research) they are favoured above all others – including domestically-grown product – for their superior quality and taste.

First exported to Hong Kong and Singapore some 30 years ago, Californian grapes quickly found popularity across the continent and sub-continent thanks to the CTGC, whose mission since its 1967 inception has been to maintain and expand markets for California grapes.

The CTGC’s carefully planned campaigns paid off as exports to Asian markets continued to grow throughout the 1990s and early noughties. In 1995, the California table grape industry shipped 77,570 tonnes to Asia. This had risen to 94,632 tonnes by 2007 – representing an increase of 22 per cent in volume terms and 58 per cent in value.
In 1997 the sector gained access to China, and by 2006 the People’s Republic had become its largest Asian export market. Meanwhile, California grape exports to other key destinations (Thailand – 6,402 tonnes, Hong Kong – 24,853 tonnes, Vietnam and Cambodia – 4,501 tonnes, Indonesia – 10,433 tonnes, and South Korea – 5,048 tonnes) achieved record highs in 2007, according to the CTGC, generating some US$165m in revenue for the Golden State (total exports in 2007 were valued at over half a billion dollars).

Often identified in the market by the Commission’s logo, California table grapes are highly regarded as a brand by Asian consumers. The grapes’ origin denotes quality in their eyes, CTGC research has found. And it is this feature that the CTGC has been keen to stress in its latest promotional campaigns.

Last year’s “Real American” theme in Singapore, China, Hong Kong, Malaysia, Thailand and Vietnam was born from this desire to differentiate Californian grapes from the rest in an increasingly competitive marketplace, where volumes from a widening global network are rising.

Added to that was the need to dispel mounting consumer confusion over product labelling in certain Asian markets, where some grapes misleadingly claim to be US grapes, when in fact they are grown in China but from a US variety or seed imported from the US.

By kitting out all outlets selling California grapes with “Real American”-branded promotional materials last year, the CTGC hoped to hammer home its message in these target markets. This year the CTGC says its campaign will be even more specific, stressing the Californian origin of its grapes throughout the May to January season.

“The new campaign more clearly identifies the origin of California versus America or the US, and strongly brands the California origin,” explains the CTGC’s Susan Day. “The distribution of branded materials at retail aims to counter confusion over other origin grapes that claim to be US. The California Table Grape Commission is monitoring the use of confusing origin claims and is working with the US Embassy in Beijing on the issue.”

To avoid any mishaps, retailers are asked to sign an agreement that they will only use the materials and the Commission logo to promote California grapes. And the CTGC’s locally-based merchandising teams check that they are true to their word.

“We expect to see continued growth in Asia. The continued retail expansion in Asian countries has helped the industry grow, and the Commission’s marketing plans are designed so that they maximise potential growth in the region,” says Ms Day. “In China we expect to see an expansion of our promotional programmes as the infrastructure develops in other cities (aside from Beijing) and consumer disposable incomes grow."