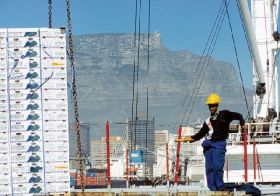 South Africa's fruit industries have made a passionate plea to trade unions not to involve their members, who work in ports and on railways, in the nation-wide transport drivers’ strike which is having a crippling effect on the country.

The driver strike has followed a mining strike, which resulted in conflict at platinum and other mines and resulted in many deaths amongst those involved. The strikes and the subsequent action of police have drawn worldwide condemnation and has resulted in South Africa’s credit ratings and economic forecasts being reduced, while the country’s currency has been under extreme pressure against all major world currencies.

"This is an urgent plea to the South African Transport and Allied Workers Union (Satawu) not to involve workers at ports and railways to join the strike by the roadfreight truck drivers," the statement continued.

"Reliable transport services for perishable products are vitally important for the fruit industry and the economy in general, and when they come to a halt, both the sector and the economy suffer. The South African fruit industry is a highly competitive, global industry which exports the bulk of its produce, in turn earning vital foreign exchange for the country."

The industry's annual export earnings are reported to be R12bn (€1bn). The intervention of the industry comes at a time when the last citrus of the current season is being exported and while deciduous growers are preparing for their export season.

The statement noted that South Africa's fresh fruit industries create and support many jobs, mainly in rural areas: "Around 460,000 people are employed full time in the fruit industry and 2m people are dependent on their income."

Fruit SA explained that in May 2010, the fruit sector was the industry most impacted by the Transnet strike, losing R150m on the exportation of fruit. Shippers could not deliver their produce to overseas retailers, wholesalers and importers, jeopardising their sales programmes, and the fruit industry’s supply chains were severely disrupted and, in some cases, export contracts were permanently lost.

"This (new strike) will result in further job losses and ultimately a reduction in the production of fruit in our country and much leading economic growth and development," the statement concluded.