Tesco in the dock over berry promo

Retailer fined after running misleading half-price promotion on strawberries sold in 2,300 stores across England and Wales 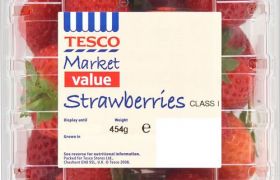 UK supermarket chain Tesco has been fined £300,000 for what has been described as a "misleading" price promotion on fresh strawberries.

According to city officials, punnets of the fruit priced at £1.99 were flagged as 'half price' in 2,300 Tesco stores across England and Wales, but had not been on sale at £3.99 for long enough to warrant the 'half price' description.

The company, which has apologised for the offence, admitted a total of four counts of unfair commercial practice relating to the misleading price promotion at one of its Birmingham stores in 2011.

The court was told that Tesco's special £1.99 offer broke the rules because it had lasted for 14 weeks from June to August 2011, despite the fact the strawberries had been on sale at the higher price for just one week and then at £2.99 for a further seven-day period.

The rules stipulate that a lower-price grocery offer should not exceed the time for which the products were sold at the higher price.

The case related to England and Wales but not Scotland and Northern Ireland, where trading standards cases come under a different jurisdiction.

Birmingham City Council said the retailer's approach to pricing was designed to "cause the average consumer to make a transactional decision that they would not otherwise have made".

The council's head of trading standards, Sajeela Naseer, described the court ruling as a victory not only for consumers in Birmingham itself, but across the country.

"It was the council's case, confirmed by Tesco's guilty pleas today, that this was a misleading offer which deceived the purchasers of strawberries over many weeks during the summer of 2011," she commented.

Tesco was contrite in its response to the decision. "We apologise sincerely for this mistake, which was made in the summer of 2011," it said in a statement. "We sell over 40,000 products in our stores, with thousands on promotion at any one time, but even one mistake is one too many."

It added that steps had been taken to address the problem: "Since then, to make sure this doesn't happen again, we've given colleagues additional training and reminded them of their responsibilities to ensure we always adhere to the guidelines on pricing."