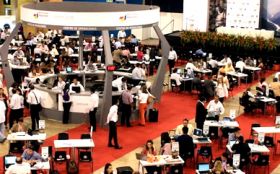 Proexport Colombia, the agency for the promotion of Trade, Tourism and Investment, says around US$60m of business is expected to have been generated from two business networking events it hosted recently. The Business Matchmaking Forum Europe brought together more than 150 Colombian exporters and a similar number of potential EU buyers, including several from the fresh produce industry, in two events held in Frankfurt and Paris in late October.

“Around 75 per cent of the participating buyers had never done business with Colombian exporters before, while 88 of the Colombian companies involved are entering the European market after years of not exporting in that trading block,” said María Claudia Lacouture, Proexport’s president.

The association said almost half of the EU buyers were looking to trade within the agribusiness sector, including a number seeking to link up with exporters of exotic and tropical fruits. Jack Wilder of Fesa UK, who attended the Paris forum, said the event had been well run and generated a number of interesting leads for the company. “Colombia’s banana export business is highly developed, as are exports of air-flown exotics,” he said. “The issue now is whether it can tap into the potential of other large volume commodities.”

Lacouture said the results of the events reflected current and existing opportunities for Colombian products in the EU market since the passing of the Free Trade Agreement between the EU and Colombia in August.