Signs of recovery for Jamaican bananas 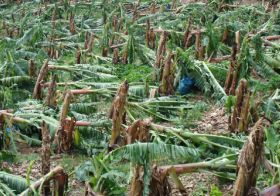 Jamaica's agriculture minister has confirmed that the island's banana export sector is alive and kicking once more.

Roy Clarke said that a shipment of the fruit will be sent to the UK this week - the first since Hurricane Sandy slammed into the island in 2012, devastating production, the Jamaica Observer reported.

Clarke confirmed that while the export industry was not at the levels seen before 2012, the Wednesday shipment (11 June) would mark an important return to the market.

He added that there had been positive noises from the UK, with customers keen to once again sample the particular qualities of Jamaica's bananas.