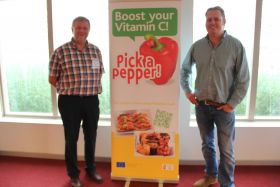 Dutch growers are launching an ‘impulse’ campaign to stimulate domestic consumption in order to absorb produce that should have been exported to Russia.

The campaign, named Samen Sterk (roughly translated as Together Strong), is described as an ‘impulse move’ rather than a formal strategy, and was initiated last weekend following news of the imports ban.

It will focus on social media using the slogan ‘We eat our problem’, to encourage Dutch consumers to support their producers, and will formally launch on Monday through Facebook, Twitter, and on the campaign website www.stichtingsamensterk.nl.

Pleun van Malkenhorst, managing director of pepper grower group Rainbow Growers, said that, at the moment, there is a good momentum in the Netherlands to buy Dutch produce following the death of 154 Dutch people when the passenger plane MH17 was shot down last month. “First there was the plane tragedy, now all our borders are closed for produce. There is a feeling for Dutch consumers to pick a Dutch label over a Spanish one,” he said.

Several grower cooperatives and private companies including the Greenery, Red Star and Koppert Cress are behind the move, which is being run in the evenings and around ‘day jobs’ by the growers themselves, according to van Malkenhorst. It primarlly focuses on tomatoes, peppers and cucumbers, but also includes apples, pears and potatoes.

Around six per cent of peppers grown in the Netherlands are usually sent to Russia, and growers have said they will try and divert this into the domestic market by increasing consumption.

Social media messages will be backed up by recipes to inspire new ways of cooking with peppers and encourage Dutch consumers to buy more produce.

Gerrit jan Kornet, of pepper grower group P8, said: “It’s a desperate situation. When you lose six per cent of your market, the price goes down in all your other markets. People know there a lot of peppers around, so the price has dropped.

“We want to say to people, you usually buy two peppers a week, buy more, go for it! Help your country’s producers.”

Dutch Conference pears have been the worst hit by the Russian ban, followed by peppers and tomatoes, van Malkenhorst added.

Both men spoke to FPJ at a press event at Kent-based greenhouse site, Thanet Earth, at the annual launch of the promotional pepper campaign ‘colourfultaste’.