Russia's ban on EU and Moldovan apples has increased its dependence on Ukraine, despite frosty relations between the countries 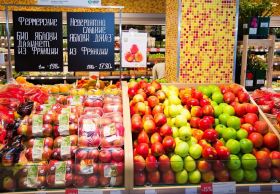 According to Ukraine-based analysts Fruit-Inform, the country has succeeded in quadrupling its apple exports to Russia during the month of August compared with 2013.

This increase comes in spite of the severely strained relations between the two countries following Ukraine's forging of closer ties with the EU, Russia's annexation of the Crimean peninsula and the Malaysia Airlines crash over eastern Ukraine.

However, Russia's ban on imports from the EU and Moldova, which were the top suppliers of apples to Russia in previous seasons, has increased its reliance on Ukraine.

According to official statistics, Ukraine's exports to Russia exceeded 3,000 tonnes for the month, making the country the fourth biggest supplier behind China, Serbia and Azerbaijan. A year ago, Ukraine ranked just seventh.

In the July-to-August period, Ukrainian apple exports to Russia totalled 3,500 tonnes, three and a half times higher than over the same period last season.

The sudden increase has been attributed to Russia's ban on imports from the EU and Moldova, the countries, which had been the leaders in apple exports to Russia in the previous seasons.