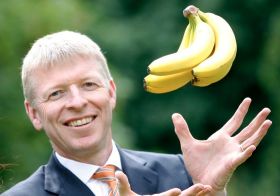 Irish fruit importer Fyffes insists its proposed merger with Chiquita is still the best option for all concerned, following an improved offer of US$14 per share from the US firm’s rival Brazilian suitors Cutrale-Safra.

“The agreed merger between Chiquita and Fyffes remains superior to today’s unsolicited takeover offer from Cutrale-Safra,” said David McCann, Fyffes chairman, pointing to Chiquita’s announcement of 14 October, in which it implied that the ChiquitaFyffes deal was currently worth between US$15.46 and US$20.01 per share.

The Chiquita board continues to favour the original plan to merge with Fyffes, and both companies are banking on shareholders viewing the deal as potentially more lucrative in the long run.

“The combination provides for substantial upside for all shareholders who will benefit from the combined company’s equity growth prospects and US$60m in annualised synergies already identified and achievable by 2016,” McCann added.

“Comparatively, a deal with Cutrale-Safra undervalues the company's potential and represents only a finite value, putting a hard cap to upside for Chiquita shareholders.”

McCann also confirmed that the ChiquitaFyffes deal had received all necessary regulatory approvals and, as such, was “positioned for an expeditious closing following shareholder approval”.