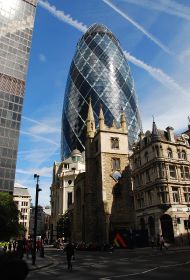 Brazilian bank Safra Group has bought distinctive London skyscraper The Gherkin a month after it co-bought US banana company Chiquita.

The group, which is controlled by Brazilian billionaire Joseph Safra, is said to have shelled out over £700 million for the deal, according to industry reports.

Safra, whose personal wealth is valued at around $16bn (£10.7bn) according to Forbes, founded the Sao Paolo-headquartered bank and is known as one of the world’s most discreet billionaires.

The acquisition of Chiquita is subject to regulatory approvals and is expected to be completed by the end of the year, or early 2015.