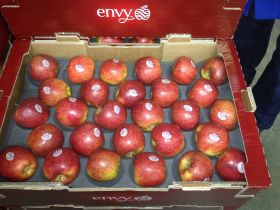 The first-ever pallet of UK-grown Envy, destined for Singapore

Due to arrive in mid January, the Singapore consignment adds to four pallets that will be air freighted to Malaysia to be received by Senja Import.

Total UK export volumes for this season will be between five and seven containers – the equivalent of between 100 and 150 tonnes.

Commercial manager for Worldwide Fruit, Gary Harrison, said the Malaysian importer was “desperate” to receive UK Envy ahead of the Christmas trading period. “These are exciting times,” he said. “In the New Year we are planning more container loads to Singapore, Malaysia and Myanmar, where we have customers eagerly awaiting arrivals of UK Envy.”

The news is the first time UK-grown Envy apples have been exported and marks the start of an exciting period of overseas growth for the Enza-owned brand.

While small volumes of Envy are currently grown in the UK, Enza has recently announced it is significantly increasing the European acreage of the apple in Italy, France and Spain.