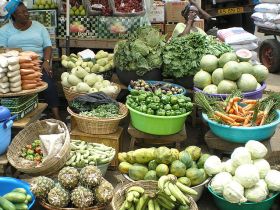 Over the last six years, Ghana in West Africa has seen its economy increase by 6 per cent a year on average, and although growth has since slowed, economists expect it to pick up again in 2015, CNN reported.

Agriculture already plays a major role in the country, accounting for 20 per cent of GDP and employing roughly 60 per cent of the workforce, but recent signals from the government have pointed to a greater focus in the future, not least on vegetables.

According to the Ghanaian government, efforts are being made to diversify the country's economy, which remains heavily reliant on oil, gold and cocoa, with vegetables regarded as the best way to boost growth.

Last year, the country exported 42,637 tonnes of vegetables, including yams, chillies, okra, aubergines and marrows, compared with just 11,259 tonnes in 2009, according to figures from Trade Map.

The vegetable industry reportedly makes nearly US$3m a year, but the government believes that with the right investment in local farms and crops, this figure could rise to over US$25m annually.