Strawberry production areas are on the wane throughout Italy, despite consumption continuing to rise in the country 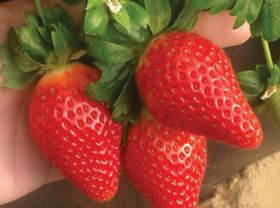 The area dedicated to strawberry production has fallen by 4 per cent in Italy over the past year, according to marketing agency CSO (Centro Servizi Ortofrutticoli), standing at 3,570ha this year.

Some 83 per cent of the crop is protected production, with the remaining 17 per cent cultivated in open fields. The latter production has reportedly experienced a decline of 10 per cent throughout Italy, with the exception of parts of the south.

In the north of the country, where Veneto is the leading region, the production area has fallen by 100ha this year.

In Emilia Romagna, Bolzano and Trento, production areas have dropped by 6, 12 and 5 per cent respectively.

Only Piedmont bucked the downward trend, the production area rising by 13 per cent.

Although the Italian strawberry market has been tough of late, impacted by poor weather, high production and low prices, consumption remains positive, up 4 per cent from last year, while the marketing period has been extended by the arrival of new varieties.