Efforts to reinforce Prunes from Chile brand in this key market are paying off, body says 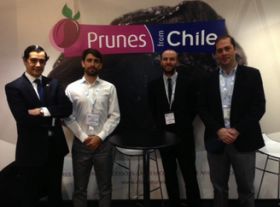 Chilean prunes continue to make steady inroads in the UK market, which shipments rising by 11 per cent in 2014 to reach 3,340 tonnes. Andrés Rodríguez of Chile Prunes said the UK represented an important market for the industry and that it would continue to work to consolidate its position there through its Prunes from Chile brand.

“The Prunes from Chile brand embodies the climatic, geographical and phytosanitary characteristics that enable Chile to produce food of the highest quality,” stated Jennyfer Salvo or trade promotion body ProChile.

Ariel Cifuentes of Chile Prunes said: “We held important meetings with representatives of various sectors who greatly value the quality of our prunes. There was also a high level of interest from the specialist media who wished to learn more about the Chilean industry, which has become a key supplier to markets worldwide.”

The Prunes From Chile campaign is a public-private collaboration between Chile Prunes and ProChile which promotes Chilean dried plum around the world.