Turbulent times for the vegetable trade 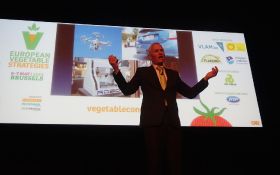 Consumers seem likely to spend less on vegetables in the years ahead, with more of their budget going towards technology and fresh produce in general struggling to compete with higher-energy foods unless new commercial strategies are adopted to encourage higher levels of consumption.

That was the rather bleak message that emerged from the morning sessions of European Vegetables Strategies, the annual conference and networking event for the vegetable category, which took place in Brussels, Belgium, on 7 May.

Setting the scene as far as the European market is concerned, Ed Garner of Kantar Worldpanel explained how the UK in particular has continued to gravitate towards discount retailing, reinforcing a discount trend seen in other European markets.

While upmarket supermarket chain Waitrose has also acquired market share in the UK, Garner noted that consumers were now spending more of their overall tighter budgets in Aldi and Lidl, to such an extent that the two companies combined are now larger than Morrisons in terms of how much of the UK market they command.

Data shows that Aldi, Lidl and Waitrose have together taken 5.2 per cent more market share in the UK over the past 12 months, a figure equivalent to £6.5bn in sales.

“It’s the most turbulent market in the UK I’ve ever known,” he commented. “Aldi and Lid are growing rapidly, and while some of the mainstream retailers have learned to compete, the result is that the rest are losing sales and profit.”

He added: “The market has become extremely competitive. There is an even greater need to be different and to stand out in the market.”

Cor Molenaar, associate professor at the Rottedam School of Management and a leading strategic advisor to supermarkets, told delegates that consumers were spending around 10 per cent more of their disposable income on technology and “products that didn’t exist ten years ago”.

That move towards greater use of technology was changing the way products including fresh produce were sold, Molenaar observed. Increasingly in future, he said, people would buy their fresh produce via platforms such as Amazon and Alibaba, instead of traditional, physical retail stores.

“The customer is now the start of the process. This is the demand-driven economy,” he said. “You have to really understand these new customers by forming partnerships and collaborating to supply web platforms, not compete so fiercely with each other.

“The real enemies, as far as consumer spending is concerned, are Amazon, Alibaba, Apple, Samsung and all the technology companies who are taking more and more of the consumer’s budget.”

Meanwhile, Harm Veling of Radboud University in Nijmegen, The Netherlands, said the vegetable business in particular faced a major challenge in convincing consumers to eat more of its products – especially when considering that seeing fresh produce is proven to have far less impact on consumer appetite than seeing high-energy foods such as chips or chocolate.

“Vegetables do not create as strong reward stimuli in consumer’s brains as high-energy foods do,” he explained. “This is a problem for the category.”

With consumers constantly bombarded with advertising for high-energy foods, it has become more and more difficult for them to eat healthily.

“Also, increasing portion size doesn’t seem to have any impact on fruit and vegetable consumption, whereas it does with high-energy foods,” he added.

Strategically speaking, he continued, the vegetable trade would need to work harder to promote the healthy attributes to consumers, for example by including cartoon characters on packaging to seize the attention of younger consumers.