Klipper Stream, which has travelled 1.2m miles and carried 2.6bn bananas, has set sail for the Caribbean after celebratory event 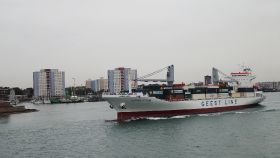 A ship that has carried 2.6 billion bananas from the Caribbean to the UK yesterday (11 August) set sail on its 100th voyage from the Albert Johnson Quay in Portsmouth.

This 100th journey will see Klipper Stream carry new luxury cars, dry cargo, sugar and other British products to the Caribbean, before returning to the UK on 6 September laden with tropical produce.

Having covered around 1.2 million miles during her 100 voyages, the ship usually travels from Europe to the Caribbean, and has just finished a mango season in Puerto Rico.

Klipper Stream takes eight days to cross the Atlantic and 28 days for a round trip Portsmouth to Portsmouth. Along with three sister vessels (Benguela, Agulhas and Timor Stream), the fleet maintains a weekly presence for Geest Line within the Caribbean, arriving into Portsmouth on a Sunday and sailing on a Tuesday.