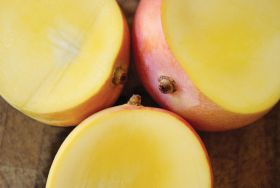 Western Australian mango exporters are eyeing a window of opportunity in the UK market, according to Australian news network ABC Rural.

The state’s Department of Agriculture and Food (DAFWA) is working with leading British retailer Tesco to improve its handling and transport practices, in an attempt to extend the shelf life of the fruit.

It is envisaged Western Australian mangoes would complement supply programmes Tesco has in place with Pakistani exporters, allowing UK consumers to purchase the fruit year-round.

“There's huge potential and part of the work we've been doing has really been paving the way for that," DAFWA research officer Pete Johnson told ABC Rural. "For these supermarkets to run their programs, they need 12 months' supply of fruit. Getting the right infrastructure and handling practices in place is key for it to work.”

As part of their research, DAFWA and Tesco are using Pakistani mangoes as test subjects for a variety of possible treatments, as they bare similar characteristics to West Australian mangoes. Johnson hopes that a consignment will be sent to the UK during the upcoming season.

“I'd like to try and get something off this year if possible, but some of that's going to depend on how the season pans out and the availability of fruit, but certainly for the following season it would be ideal,” Johnson explained.

With the UK also sourcing large volumes of mangoes from Central and South America, Johnson said the Western Australian industry was under no illusions about the work it would have to do to build consumer awareness and confidence in its offering.

“When you put a more sensitive variety into the chain, such as those from Australia or those from Pakistan which we're working with, it's really detrimental to the quality of the fruit and we're getting really poor results," he added. "It basically comes down to changing the practices within the existing system to handle more sensitive varieties."