Exclusive: Hein Deprez tells Eurofruit there is still plenty of opportunity to grow produce sales in Europe and North America 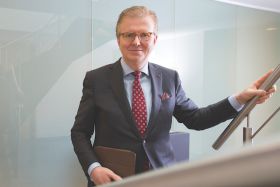 Univeg Group’s recent merger with Greenyard Foods and Peatinvest, which made the Belgian company the world’s largest supplier of fresh, frozen and tinned produce, will not precipitate a sudden rush to secure new sales in emerging markets like Asia.

Instead, according to the company’s executive chairman Hein Deprez, there remains plenty of scope for the €3.9bn business to boost consumption and sales of fresh fruit and vegetables in its core European markets, as well as in other parts of the world where it is already active.

The most notable among those are North America, through its Florida subsidiary Seald Sweet, and in the Middle East, where it now has a representation in Dubai and a number of supply programmes managed by its southern European colleagues based in Italy.

Speaking exclusively in the September 2015 issue of Eurofruit, Deprez said growth in other areas, such as Asia, would depend on a variety of things being in place besides a simple upturn in demand – above all the right investment in logistics infrastructure and the emergence of large-scale customers.

“There is so much potential for further growth. We can follow customers into other areas, but we can also grow with existing customers in the areas we are in now, simply by building up our basket not only for fresh but also in frozen and canned products,” he explained. “So this is a massive possibility to grow further.”

As a man who prefers to take the long-term view, rushing into new markets like Asia simply because others are doing so is not a strategy that appeals to Deprez – although he does not rule out the possibility that Univeg will one day be a major player in the region.

The group does have a joint venture with Mahindra in India that is already exploring new opportunities to supply what is the world’s second-largest market in terms of population. The main challenge in that particular case is, as Deprez suggested, to build a secure and reliable cold chain.

The important thing to remember, he pointed out, was that replicating the Univeg model in a new part of the world was a huge undertaking.

“If you want to build up your business in these new areas, you have to invest massively in logistics," he said. "It is the logistics that will supply fruit, so you need a logistical footprint. This is the base and I know what it means to have this kind of capital on the table, to build it and to have the right people to manage it. That does not mean that we are not interested, but you have to do it step by step because it takes a lot of investment.”

The full interview with Hein Deprez is published in the September 2015 of Eurofruit. For details of how to subscribe, click here.