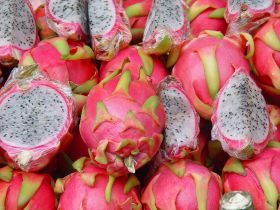 Thong said that by the end of August 2015, more than 8,690ha of dragon fruit in BinhThuan, Long An and TienGiang provinces had been hit by disease. Thousands of hectares of orchards in other provinces, including Dong Thap, Vinh Long, Ben Tre, TraVinh, SocTrang and Can Tho, were also affected.

Thong said the spread was down to the limited supply of disease-free seedlings, as well as inadequate farmer knowledge of disease prevention.

Nguyen Van Hoa, head of the Southern Orchard Institution, said that to limit the spread of diseases, farmers should cut down diseased trees before planting again.

To date, nearly 300,000ha of orchards in the Cuu Long (Mekong) Delta region produce 3.5m tonnes of fruit each year, almost half the national fruit output, and most of which is dragon fruit, the report said.

In the first seven months of the year, the delta region exported more than 160,000 tonnes of fruit to the US, Japan, South Korea and China, earning more than US$1bn for farmers.