Group 'out of fresh produce' and will concentrate on storage and customs clearance, according to reports 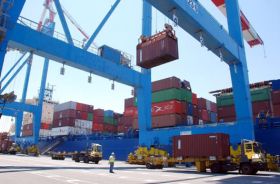 Israeli agricultural group Agrexco has reportedly suspended all fruit and vegetable exports for the past two weeks, and has failed to renew its stock.

According to daily publication Hamodia, the company's trustees informed the Tel Aviv District Court that the company had run out of fresh produce two weeks ago.

Hamodia said that Agrexco is now expected to to focus purely on storage and customs clearance at Ashdod port, operations that only require 19 workers - meaning that hundreds of employees working in the fresh production and packing side of the business are set to be laid off.

The group reportedly owes "tens of millions of shekels" to various creditors, Hamodia noted, including the International Bank, Ashdod port and various farmers.