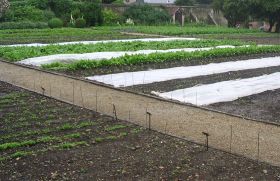 Leading hotel operator AccorHotels, whose portfolio includes the Pullman, Sofitel, Novotel, Mercure and Ibis chains, has announced plans to plant vegetable gardens in many of its 3,900 hotels, according to the Guardian.

The aim, according to the group’s chief executive, Sebastien Bazin, is to “reduce food waste by 30 per cent, in particular by sourcing food locally”.

The French group, which serves 150m meals a year, generating 25-30 per cent of its revenue, revealed that it would first work out how much is currently being wasted at its hotels. Its restaurants will therefore be required to weigh and record what food is thrown away.

Amir Nahai, head of Accor’s food operations, revealed that the group’s menus, which can currently feature up to 40 main courses, would be shortened.

Nahai estimated that the group would create around 1,000 vegetable gardens at its hotels by 2020, while energy efficiency would also be improved, with the evenutal aim of making the hotels carbon-neutral.

In its previous five-year environmental plan, AccorHotels revealed that it had cut water consumption by almost 9 per cent, energy use by 5.3 per cent and carbon emissions by 6.2 per cent.