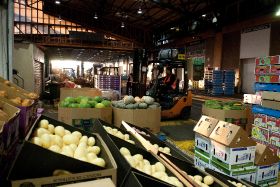 The Silver award went to London’s Borough Market, after diverting 16,000 kg of produce to good causes, and Bronze was presented to CEAGESP, the wholesale market of Sao Paulo in Brazil, for its ‘Zero Hungry’ programme.

Sydney Markets , Australia, and Mercagranada, Spain, were presented with merit certificates during the awards ceremony, for work on health of the surrounding communities and reducing landfill waste through compost respectively.

In a ceremony held in the Philharmonic Concert Hall in Lublin, Poland, on Friday (20 May), winners were announced during the closing dinner of the recent WUWM conference, hosted by the Lublin Wholesale Market.

The theme of this year’s Markets Awards was ‘Effectiveness in reducing food loss and food waste on the market”, and judged according to member market actions, and activities linked with a Memorandum of Understanding (MoU) signed between WUWM and the UN Food & Agriculture Organisation (FAO) last year.