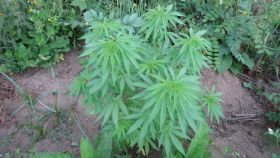 Marijuana has medicinal purposes, according to some research

A Writtle College student is assessing whether a new law that legalised medicinal production of marijuana in Jamaica could result in a sustainable and commercial industry.

Simon Jones, who is working on his PhD, is investigating how the new law has affected production systems in the country, and whether it will see Jamaica become the global hub of production of marijuana for medical purposes.

He has interviewed Jamaican growers about use of fertilizers, pesticides, market prices, and their engagement with the new law, which came into force in Spring 2015. It means that farmers, who previously grew marijuana illegally, can now able to grow up to one acre legally if they met requirements including a police check, evidence of land title and tax compliance and security measures.

His work already shows that despite extensive media coverage in Jamaica there is little knowledge or understanding by the farmers themselves with the new medical marijuana scheme.

Jones said: “Described by P.J Patterson, the former Prime Minister of Jamaica, as ‘Green Gold’, medical marijuana offers Jamaica the opportunity to establish itself as a hub for the production of marijuana using organic and sustainable processes, a leading international destination for medical tourism and as a regional base for cutting-edge research into the medical benefits of marijuana.”

The research is being supervised by Dr Chris Bishop, who specialises in postharvest technology at Writtle College.

Bishop said: “The opportunity to change a troublesome issue into an income earner for small farmers and the Jamaican government is an opportunity that must not be missed by too much or too little control and must be seen as a technical as well political/economic challenge. I believe the work of Simon is providing important assistance to try and achieve the ‘Green Gold’.”

Marajuana is not recognised as having any therapeutic value under the law in England and Wales.