Worker dispute with Slovenian Ministry of Infrastructure has been resolved, with port again up to full speed 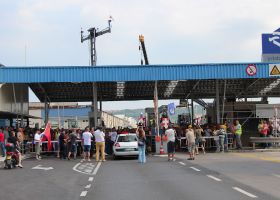 Image courtesy of the Port of Koper

The blockade of Slovenia's Port of Koper, which began on 1 July, ended earlier this week when the management board of Luka Koper agreed for a full-scale resumption of operations, although perishable goods were apparently unaffected through the duration of the worker action.

The blockade was triggered by the emergence of a document in which the Slovenian Ministry of Infrastructure predicted amendments to the port's concession contract, something that would radically change the organisation and management of the port.

Under the plan, the port would be divided into concession zones and a new, dedicated port authority would be introduced, altering what is seen as the port's existing proven and successful business model – changes the port's workers showed strong opposition to.

The blockade lasted until 10pm on Tuesday 5 January, when work carried on "with all available resources", according to Luka Koper management board president Dragomir Matic, who also pointed out that the action was not an ordinary strike and involved no dispute with the port management itself.

Milena Slobko-Jerman, who heads up sales and marketing at Luka Koper, told Eurofruit that while the blockade was taking place, highly perishable goods were virtually unaffected, as regular deliveries were made during the blockade.

"Highly perishable goods were the exception [to the blockade] and reefer trucks were entering the port area for loading as normal," she explained.