The Turkish exporter’s continued expansion has made the construction of a new, larger packhouse absolutely essential 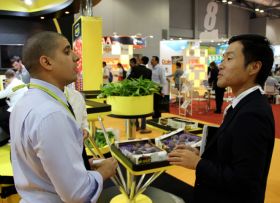 Turkish exporter Aksun revealed at the start of the year that it was building the country’s largest fruit and vegetables packhouse in order to keep up with the impressive growth witnessed at the company, estimated to be around 20 per cent a year.

That packhouse, located in Tarsus on the southern Mediterranean coast, is reportedly set to open its doors in October, according to the company’s Akin Söyleyen.

“The new packhouse is much bigger than our current one,” said Söyleyen. “We have a current capacity of 40,000 tonnes, but we are constantly growing. The new packhouse measures 25,000m2, and there is room for expansion.”

The facility will handle Aksun’s complete range of products, including citrus, pomegranates, figs, melons and stonefruit.

“The packhouse will be divided into sections,” said Söyleyen. “Pomegranates will not be handled in the same area as citrus, for example. We are investing in new, state-of-the-art machines and putting in every effort to make this the best packhouse possible.”

The facility will also include at least 40 cold rooms and six pre-cooling rooms, the latter being important for Aksun’s development in far-flung markets.

“The pre-cooling rooms are especially important for sending to destinations with long transit times, such as East Asia,” said Söyleyen. “Usually it takes 1-2 days to pre-cool, but with this fast cooling system, it takes just six hours. This gives us an advantage when sending long distances.”

Aksun recently announced its entry into a list of the top 1,000 Turkish exporters, an honour presented by the Turkish Exporters Assembly. The company revealed that it is aiming to enter the top 500 list in the next three years.