Having made its name as a key domestic supplier, Toader Teodor is now looking to grow its exports, starting in central Europe 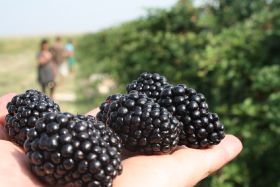 Size isn’t everything, of course, but the fact that Romania’s largest berry farm produces the country’s largest thorn-free blackberries has brought it a good deal of attention in the last few years, including some valuable publicity courtesy of national television broadcasters.

Now, having established itself as a major player on the national market, entrepreneur Teodor Toader is looking to develop its export business in neighbouring countries.

The farm itself is about an hour and a half’s drive west of the country’s capital Bucharest in the county of Argeș, part of the Muntenia region that sits between the Danube and the Carpathian mountains.

Having started out with just a handful of blackberry plants back in 2006, Toader set about growing and expanding his business to the point where, today, his 6ha plantation reportedly meets much of Romania’s demand for fresh, high-quality blackberries, as well as more modest volumes of strawberries, raspberries and blackcurrants.

Toader’s company, Toader Teodor, supplies much of its fruit to Mega Image, the chain of Romanian supermarket stores owned and operated by Belgium’s Delhaize Group.

“The fruit is the largest on the Romanian market, about 15-30 grams, sweet and full of flavour with no seeds,” explains Toader. “The size, texture and taste of the fruit has led to huge demand for thorn-free blackberry plants in Romania, Bulgaria, Austria, Slovenia and the Czech Republic.”