Investigation relates to accusations of impropriety against four members of Orsero family, including current chairman 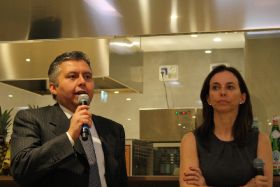 Italy’s Guardia di Finanza has raided the Savona and Vado Ligure offices of GF Group, the Italian fresh produce import-export company, as part of an ongoing investigation into historic allegations that Ligurian bank Carige offered favourable loans to companies between 2009 and 2012.

According to various reports in the Italian press, four members of GF Group’s owner the Orsero family – including chairman and former managing director Raffaella Orsero – have been accused of fraud, with one (Luciano Orsero) also suspected of money laundering.

Several newspapers also refer to a cash sum of €630,000 being seized by the tax police at Raffaella Orsero’s home.

According to the prosecutor Silvio Franz, the quartet stood to benefit from alleged fraud and embezzlement during the four-year period to the tune of €91m, apparently aided by the bank’s then president Giovanni Berneschi approving loans to “friends” even despite high levels of existing debt.

In the meantime, Antonio Orsero, Raffaella’s brother and GF Group’s managing director at the time of the alleged impropriety, finds himself facing a charge of violent sexual assault, allegedly involving a former Romanian nanny with whom it is understood he had previously had a consenting relationship.

Following his arrest and subsequent release on bail, GF Group itself issued a statement in which it underlined the fact that Orsero had not held any management role within the company since September 2013, and so any possible allegation or prosecution involving the former director would not have any material impact on its present operation.

This article was amended following publication to reflect more precisely the nature of allegations levelled at members of the Orsero family concerning its leveraged buyout in 2008.