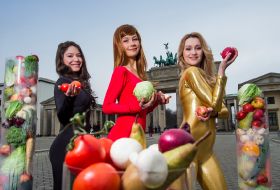 To mark the 25th anniversary of Fruit Logistics, the host country Germany is, for the first time, also the partner country - meaning the spotlight has turned on the country's fruit and vegetable production and consumption statistics.

According to estimates by the AMI and the Federal Statistical Office, Germany's fruit harvest in 2016 totalled around 1.32m tonnes, roughly equivalent to the previous year. This figure is significantly lower than the record set in 2014, when the harvest was 1.49m tonnes.

As indicated by the AMI, the market production of vegetables in 2016 rose by more than 2 per cent in Germany to 3.5m tonnes. This growth is mainly due to an increase in land under cultivation. As in the previous year however, the harvests were slightly below average.

While private households in Germany only slightly increased their spending on food and beverages by about 1 per cent, the increase in fruit and vegetables (including potatoes) was just under 6 per cent.

"This means that fruit and vegetables once again belong to the most important categories in the retail trade", says Helmut Hübsch, a consumer research specialist from the Gesellschaft für Konsumforschung (GfK).

In his view, the number of actual purchases deserves special attention: "Households purchase fruit and/or vegetables an average 86 times per year: 86 times in 52 calendar weeks means that households buy fruit, vegetables, or both more than once a week."