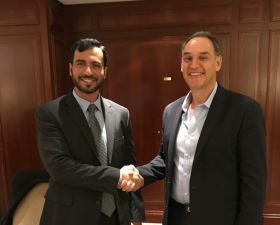 Abu Dhabi-based Elite Agro has gained the exclusive rights to grow the world’s best blueberry varieties across the Middle East, having signed a licence with Australian breeder Mountain Blue Orchards.

“Blueberries are a superfruit, rich in antioxidants which are important for fighting many diseases,” said Saeed Al Bahri, cluster managing director at Elite Agro after the signing of the agreement in Berlin. “We are very proud and excited to secure the rights to grow this important and valuable crop.”

Mountain Blue Orchards have a range of varieties to suit different consumer tastes and different climates, including the tough conditions of the Middle East region.

Global demand for blueberries continues to increase, including in the Middle East, which relies on airfreighted imports from sources including Mexico.

“Elite Agro will become one of the top blueberry growers in the world,” stated Al Bahri. “We already grow a large area in Morocco and supply countries in northern Europe through a well-known international brand. We also have 100ha planted in Serbia. With the increased demand for health-giving products like blueberries, we are committed to growing a product that consumers need.”