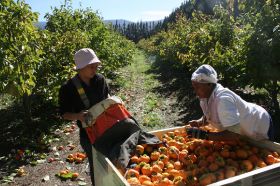 Climatic conditions and favourable weather, including plenty of sunshine, have combined to lift prospects for an excellent 2017 Sharon Fruit season from South Africa.

The industry, which was founded in South Africa’s Southern Cape region more than 20 years ago, has in recent times grown in importance as the only Southern Hemisphere supplier of Sharon Fruit to Europe and the UK.

In recent years the industry has also increased exports to the Middle East, the Far East, the US and Canada, as well as into Africa.

“However, Europe and the UK still remain our biggest markets and we are keen to consolidate our position there,” says Pine Pienaar, chief executive of Sharon Fruit in South Africa.

Pienaar explains that the central pack house, Arisa, which is located at Buffeljagsrivier in the South Cape, is expected to receive around 5,500 tonnes of fruit this season. "We will export more than 80 per cent of the fruit but will also supply increasing volumes to the local market," he continues.

“When you start a venture of this nature to introduce a whole new fruit category into a new country it takes time for growers to adapt,” says Meir ben Artzy, senior executive at Mor International. “We believe that we have settled nicely in South Africa and established a solid production base. The summer has been relatively hot and dry and this will further boost fruit quality this year.

“Both inside South Africa and externally we find that our customers are increasingly looking forward to the South African season. he notes. "Our marketing programmes are focused on developing long term relationships with our customers and keeping excitement growing for our annual programme from South Africa."

This year’s harvest commenced in the second week of April, with the first sea shipments expected after Easter. Limited volumes will be airfreighted from this week (week 15) onwards. Regular shipments will take place until early June, with the last sales in July. In all some 4,600 tonnes will be exported.

South Africa is the only country in the Southern Hemisphere producing Sharon Fruit. The business in South Africa was established in the mid-1990’s by Mor International, which identified the Southern Cape as the ideal climate for growing the fruit. Sharon Fruit, although from the Persimmon family, is a unique fruit and is a branded product.

Production is located mainly in the Southern Cape around Buffeljagsrivier, Swellendam and Bonnievale, with limited orchards further to the west.