Macfrut aims to carve out its own niche 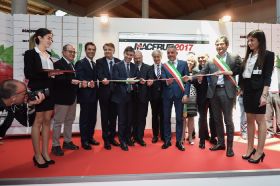 Italy's largest fresh produce trade fair Macfrut takes place this week on 10-12 May in Rimini. Here, the trade fair's president Renzo Piraccini explains how the show is planning to offer something unique to the international fruit and vegetable business.

Renzo, Macfrut's rebirth over the past three years under your stewardship has been impressive. Aside from bringing the event to Rimini, how have you managed to turns things around?

Renzo Piraccini: One key reason is innovation. This is an event where you can see innovation from all parts of the supply chain. For example, this year our main theme is the vegetable revolution because today with the likes of microgreens,  babyleaf veg and sprouts, things are changing completely. Likewise the approach: it's conceivable that in the future there will be vertical farming of vegetables close to the big cities. This is interesting because the production is done in protected climatic conditions so there is no need for pesticides. What's also interesting is that we are going to see a fresh produce sector that is much more global, with fruit kept fresh in refrigerated containers that can transport it all around the world, and at the same time leafy vegetables – which have a very short shelf-life – produced close to the place of consumption.

We're going to feature this revolution at Macfrut because there you can find all of the technologies required to produce those microgreens and babyleaf vegetables in vertical farms, as well as the kinds of technology that can make them more available to consumers and restaurants. This is something completely new for the supply chain. We've also built a test field at the fair, where companies will demonstrate machinery used in vegetable production. This is the first time it's been done inside an exhibition.

How much further do you think this trade event can grow?

RP: We are going to grow enormously. In just two years, with the third edition happening this week in Rimini, we have increased our turnover by more than 100 per cent. We've gone from 20,000m2 of exhibitor space to 100,000m2, but we're going to grow further. We're going to double in size, because we are a supply chain exhibition, not just a product fair.

How is Macfrut going to attract more people in future, especially given the huge competition it faces from other trade fairs?

RP: We are a hub for the fruit and vegetable supply chain and we work solely on this one trade fair. We know the sector and we help companies. Between 2010 and 2014 we welcomed around 200-250 retail buyers who came to buy produce, machinery, packaging and so on. At this, Macfrut's 34th edition, there will be more than 1,200 buyers. Why are they coming? Because Macfrut features something that no other trade show does: it's a show for the entire supply chain. Around one-third of the show is taken up by technology, including new types of machinery.

What about your international exhibitors? Are they increasing in number?

RP: Becoming more international is very important for us. There are lots of small and medium-sized companies that are looking at the market. If you think about it, until just a few years ago, the banana market was in the hands of just five multinational companies because the transportation was done in banana boats, the smallest of which maybe carried 15,000 pallets.

Today, there are some beautiful companies, like those I saw in the Dominican Republic last year or in Colombia this year, which export two container-loads of 20 tonnes per week. These are great companies that perhaps have one client in North America, one in the UK and one in Italy. These companies need a place where they can be seen. The big international players are organised so they have someone in charge of the production, someone in charge of administration, someone in charge of sales. When you have a company with just two or three hundred hectares, the owner-director is involved in everything; he has to speak to his customers, look at new technology and packaging, meet with those handling the logistics. Macfrut is the trade fair for him and that's why we're growing.

We're meeting the needs of these medium-sized companies that see extraordinary opportunities before them. We're helping meet the clients and markets they don't know, not the ones they know already. For an Italian company, it could be interesting to meet an African company that wants to import kiwifruit or apples.

With that growth in mind, which new countries are represented at this year's Macfrut?

RP: This year, the real news is that there will be lots of African countries present. For example, Angola is present for the first time, with more than 30 companies that have taken a maxi stand together and are exhibiting on the international market for the first time. Tanzania, Ethiopia and Lebanon too. Then there are lots of companies from Kenya, which were present last year, and from Sudan, which is a very important area. Then we have lots of exhibitors from central and South America too. The exhibition area for international companies has increased by 30 per cent compared with last year.

What about the buyers you have coming to the show?

RP: We have around 1,200 buyers at this year's event, including a group of about 30 from China and a similar number from the Middle East.

How do you think the Italian trade's links with those emerging markets are going to evolve in the next few years?

RP: Well for Italy the Chinese market is currently only open to kiwifruit. But Macfrut is an international fair and therefore also about other countries and their opportunity in these markets. What's more, you have to remember that buyers can also come here to see the latest technology. When it comes to China, we actually have around 25 Chinese companies that have exhibited for a number of years.

The other thing to point out is that we have a great big group of buyers from eastern Europe. Ukraine for example: we have a large number of major importers and agricultural companies registering from the country, where the sector is changing dramatically. Then we have people from countries like Kazakhstan, Uzbekistan, Turkmenistan, Azerbaijan, Georgia. Lots of people come from Bosnia-Herzegovina on coaches and take the chance to visit nurseries, orchards and so forth.

Just finally, why did you choose the strawberry as your featured product this year?

RP: Well, because it symbolises the recovery seen in the Italian fresh produce business. It was a product in crisis and seemingly outdone by the Spanish, but now thanks to the quality, Italian strawberries are rediscovering enormous success. Varieties with extraordinary quality like Candonga and Sabrina are developing strongly; sales are growing on the international market and growers increasingly happy.

We've certainly seen an increase in sales of Italian strawberries on the domestic market, but what chance do you think there is of similar success abroad?

RP: Strawberries are produced everywhere nowadays, so domestic consumption of new varieties, and the uptake of new technology like heated tunnels in the UK and Germany, means that fruit is imported only prior to the domestic crop. Germany, for example, imports a lot less than it did ten years ago. Quality aside, the important thing is that it has lengthened its own supply calendar.

In Italy, we produce strawberries throughout the year. So the question is, which markets don't have a tradition of producing a lot of strawberries? They're the richest ones: Switzerland and Austria in particular, then the south of Germany. Those are Italy's main markets.

Italy's two main production areas for strawberries, Basilicata and Campania, are making a name for themselves not with a mass-market strawberry like that found in Huelva, which remains Europe’s largest production area for the fruit, they’re focusing more and more on the berry itself. There just isn’t a market any more for these huge quantities at low prices; people want to eat a better strawberry, which is why the Italian offer is focusing more on top quality. Obviously the volume isn’t where it was before, but it is growing. But the growth doesn’t have to be all about volume. It can also be about quality.

Renzo Piraccini was speaking to Fruitnet managing editor Mike Knowles ahead of this week's Macfrut, which takes place in Rimini from 10-12 May 2017.