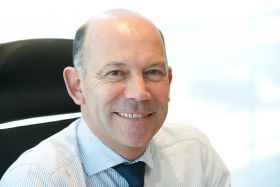 Michel Jansen, managing director of Total Produce BV in Rotterdam, says the company’s decision to relocate and outsource its logistics through Kloosterboer’s newly opened Cool Port Rotterdam facility has propelled it into the future as far as its management of fresh produce shipments is concerned.

Pallets of fresh pomegranates imported by the company became the first conisgnment to enter Cool Port during its official opening in week 21.

“The decision to leave our old location was triggered by the fact that the plans of the city of Rotterdam regarding the future of the Merwehaven did not allow us to make the necessary investments to modernize our facilities,” Jansen explains.

“At the same time, we were very excited with the plans for Cool Port, a new coldstore operation at the other side of the river. With Kloosterboer as investor and operator and Total Produce as launching customer (Cool Port will be a multi-client facility), these plans became a reality.

For Total Produce BV and its customers, the move will mean changing from an “old and dated” coldstore to a modern distribution facility with all sorts of in-house services like pre-packing, adding direct links to a multi-modal network including options for barging upstream, shortsea connections to Scandinavia and the UK, various rail road routes and a direct link to the main highway (A15) leaving the port of Rotterdam, Jansen notes.

“All in all we will be able to give our customers a much better and broader service,” he adds. “Outsourcing our logistics has a number of obvious advantages such as variable costs and a reduction of management attention, but also job security for our logistics and forwarding staff as they will all be employed by a real logistics expert, Kloosterboer.”