The outlook is brightening for pomegranates from South Africa, with new varieties showing great potential 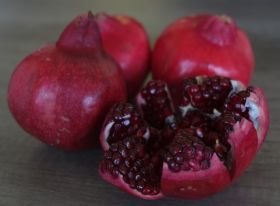 A number of new varieties that show promise to be the next generation of pomegranates have been bred and evaluated under South African conditions by Re:inc Innovation. The company stated that these varieties had great potential to be the new ‘big berry’ pomegranates, with multiplication of trees starting in August.

“From the outset, when this breeding programme started 12 years ago, we indicated that we were determined to make an impact with pomegranate varieties for the local and international market,” said the company’s Riaan van Wyk. “It is exciting to see four promising varieties with outstanding characteristics selected to date from the over 5,000 seedlings from our breeding stock.”

In the past, pomegranates have largely been consumed in the countries of production where the fruit was well known and loved by consumers. Around 15 years ago, a prominent grower in California invested in advertising that promoted the health benefits of the fruit. This led to an international reawakening and expansion of production in countries where the fruit had never been grown on a commercial basis.

The pomegranate is generally considered a ‘messy’ fruit, which is difficult to peel and consume. This has resulted in demand in western and more sophisticated markets for more consumer-friendly products, such as packs of ready-to-eat arils.

According to Van Wyk, since most pomegranate varieties have an average aril size of around 350mg, with a medium seed hardness, Re:inc Innovation is working towards achieving pomegranates with an aril size of 500mg and an almost imperceptible seed.

“It is the stated future objective of the world’s most prominent pomegranate growers and marketers to sell the arils rather than the fruit,” he said. “Attaining these characteristics of arils amongst a few others is therefore all the more important. As we notice the increased fruit size of new blueberry varieties, we believe it’s a natural path that will follow with the size of arils in new pomegranate varieties.”

Keith Wilson, exotics breeder at Re:inc Innovation, sourced many of the best varieties from the Transcaucasia region, along with a few from countries surrounding the Mediterranean Sea. “These varieties have excellent characteristics,” he said, “a balanced sweet-tart flavour, large arils, with very small soft seeds and an appealing colour, and they form the basis of our breeding programme.”

The South African pomegranate industry started with great enthusiasm in 2003, mainly by ‘pioneer growers’ who were ready to take on the challenges of creating a new industry. Unfortunately information about varieties and cultivation practices were limited.

“It soon became apparent that the hype and optimism generated around cultivating pomegranates was overoptimistic, given the fact that growers faced challenges with climatic conditions in non-traditional growing areas and with pest and disease control, which was not previously foreseen,” said Wilson. “This ultimately contributed to the sudden decline and decimation of hectares planted.”

Wilson said that Re:inc Innovation was now engaging with South African growers who wished to work with the company to successfully introduce these new varieties in South Africa.