World of opportunity for berries

BerryWorld has launched in Australia, entering into a joint venture with Piñata Farms 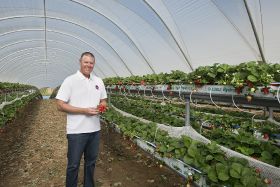 Already known in Australia for its strawberries, Queensland’s Piñata Farms has recently broadened its production through a joint venture with UK-headquartered BerryWorld.

At the same time, Piñata was looking for new premium strawberry varieties and the chance to diversify into raspberry production.

BerryWorld Group CEO Adam Olins said that when the company began looking for potential partners in Australia, it was drawn to Piñata Farms’ great reputation in the local market.

“On a strategic level, [Piñata Farm has] a similar outlook to the BerryWorld business, making it a great choice,” Olins said. “In Piñata Farms, we believe we have everything required for a successful business to flourish. This venture takes the BerryWorld Group into its third continent and expands our global reach beyond Europe and Africa.”

And what did Piñata Farms see in the BerryWorld berries? “The flavour,” Scurr told Fruitnet. “These are the best-flavoured strawberries I’ve ever eaten. The consumer feedback in the UK and Europe has been excellent and BerryWorld has continued to gain market share.

“BerryWorld is an exciting addition to the Piñata berry category.”

BerryWorld Group was launched in 2015 as the overarching company encompassing the BerryWorld operations that began in the UK in 1994 and now span Europe, South Africa and Australia.

The first crop of BerryWorld-branded strawberries made it into Woolworths stores in Queensland for the soft launch of the brand in August, with Woolworths customers in New South Wales and Victoria to get a taste of the berries as production increases.

The first BerryWorld raspberries will be harvested in February 2018 – the first crop of raspberries grown by Piñata – followed by blackberries in 2020.

“There’s huge year-round demand for berries, and while raspberry production in particular peaks in January and February, at all other times we’re short on supply,” Scurr says. “So we want to start filling that gap.

“While we weren’t looking to diversify into blackberries, they came with the joint venture bundle and, as Australia’s blackberry industry is small and under-developed, we’re excited to be part of the industry’s development here.”

Initially, Piñata will grow the berries at its Stanthorpe and Wamuran farms to prove they do grow in the warmer Australian climate, before looking to expand to third-party growers, potentially as far south as Tasmania and over to Western Australia.

The full interview with BerryWorld Australia managing director Gavin Scurr is available in the spring edition of Produce Plus, out soon.