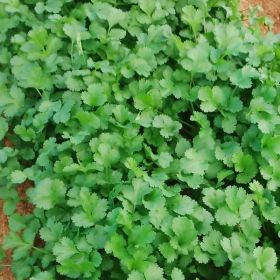 Coriander Cruiser is a dark green, high-yielding variety, which has been particularly successful for Spanish growers due to its two to three days additional shelf life, CN Seeds said.

It is also well suited to conditions over a long production season in Spain where its slow bolting has been a key attribute, said the company’s commercial manager Craig Thomas.

“Coriander Cruiser is an incredible variety, which has done very well in Spain for us,” he said. “The growers like it because it’s offering extended shelf-life and fantastic yields.

“Typically, it offers two-three days’ extra shelf-life due to the colour, which means a lot when you are transporting out of Spain. We’re also finding that it delivers at least 15-20 per cent higher marketable yield per hectare than other varieties on the market.”

CN Seeds has also launched two new slow-bolting Shanghai green pak choi varieties – Goku and Yoshi – in Spain, one of its key markets. The company will be promoting its new varieties at trade fair Fruit Attraction in Madrid next week.

Spain has seen a big increase in the production of oriental vegetables in the last three years with pak choi and Choysum becoming popular throughout Europe, the company said.

“Goku has been quite an exceptional success in the last 12 months in Spain,” said Thomas. “It’s priced competitively for its marketplace, has incredibly slow bolting tolerance which is what growers need, a great shape and yield, and puts on good weight early. It’s been a very successful new variety for the producers.”

Yoshi boasts the same slow bolt characteristics as Goku, but with a shorter, squatter shape, which means it is well suited to flow-wrap operations, added Thomas.