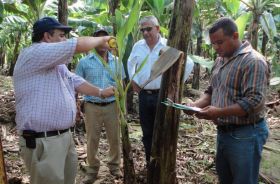 The three-year trial initiative, funded by money from the Fairtrade system - a pooled pot funded by a number of different Fairtrade markets - was created by the Latin American and Caribbean Network of Fair Trade Small Producers and Workers (CLAC) to help producers in the region and improve crop management.

The training programme worked with an initial 35 producer organisations, training the POs' trainers so that they in turn can pass on knowledge to their farmers. Focusing on the transfer of technology as a basic element of sustainable development for banana producers, the project aimed to address the competitive disadvantages that come with smallerholders having higher costs of production than large private plantations, as well as restricted access to credit, less negotiating power and availability of information and technology.

Focusing on three main strands, the project looked at soil analysis and inputs, plant populations and pre-harvest management, addressing such issues as the tendency of smallholders to overplant and offering organic solutions to more expensive chemical applications.

Two years after the Programme for Increased Productivity (PIP) was launched, there was an average increase of 29 per cent in the productivity of participating farmers' plots. They also saw an increased income of $3,238/ha per year, and an average cost reduction of $0.66 per box, generating secondary savings of $1,529/ha per year.

There was a 25 per cent reduction in the consumption of agrochemicals, while irrigation frequency was reduced by 50 per cent, explained Leena Camadoo, banana manager at the Fairtrade Foundation.