Kiwifruit, pineapples, avocados and tomatoes are some of the key products brought into the country 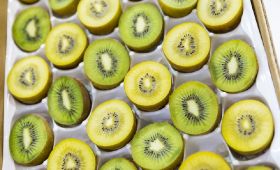 Kiwifruit is one of Spain's most imported fresh produce items

Spain imported more fruit and vegetables in the opening eight months of 2017 than it did during the same period of the previous year, according to new data from the country's Customs Directorate.

Fepex, which processed the information, said that the rise in reliance on imports demonstrated a need to implement measures to "improve competitiveness in certain crops and sectors".

Overall fresh produce imports climbed 3 per cent in volume and 8 per cent in value for the January-August period, up to 1.9m tonnes and 1.7bn respectively.

By contrast, apple and orange imports took fall during the eight-month period, down 15 per cent and 13 per cent respectively.

Potato imports were particularly notable, up 10 per cent year-on-year to 515,895 tonnes and representing 60 per cent of all vegegtable imports, while value jumped 18 per cent to €167.7m.