Asoex says there are still growth opportunities for blueberries, grapes and apples as well as organics 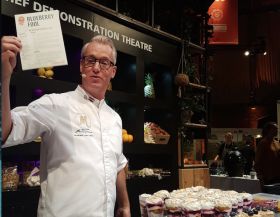 Chilean fresh fruit exporters association Asoex has reaffirmed its commitment to the European market and says there is still potential to increase sales of Chilean fruit in key areas such as organics.

“Chile remains dedicated to Europe, and maintaining our presence in what continues to be our second-largest market for fresh fruit,” said Charif Christian Carvajal, Asoex’s

Marketing Director for Europe, Asia and the Middle East.

“We are certain there’ll be more opportunities to grow exports of Chilean blueberries, table grapes, and apples to Europe. There are new opportunities to watch out for, especially in the organic market and in relation to the Eurasian alliance.”

“The organic sector is growing in Chile,” he explained. “In the future, the market will see a lot more organic blueberries from Chile, in particular.”

To further capitalise on those opportunities, next year the Chilean Blueberry Committee will participate for the first time at Biofach, the world’s leading trade fair for organic food.

“We are bringing a delegation of organic blueberry growers and exporters to meet and do business with importers and buyers attending the show,” said Andrés Armstrong, executive director of the Chilean Blueberry Committee.

Taking part in the APS17 seminar programme, Carvajal also gave a comprehensive insight into how Chile’s fruit industry is adapting to the ever-evolving requirements of international markets.

“In the next five years many varietal changes will come from Chile, especially in table grapes, as growers look at new varieties that are harvested later in the season, easier to transport, larger in size and sweeter in flavour,” Carvajal said.

“And, as for transparency, today Chile is one of the few countries in the world where you can see online how much fruit is being exported in boxes or cartons on a day-to-day basis.”

In 2016/17, Europe received 23 per cent of the 2.6m tonnes of fresh fruit grown and supplied from Chile, according to data from Asoex.

The Netherlands is still Chile’s first port of call in Europe, although in the last few seasons exports have contracted on account of growers directly supplying buyers in their end