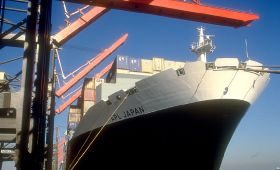 Designed to strengthen APL’s India subcontinent (ISC) offerings, the new IP2 service will enhance APL’s service coverage in the European markets of Belgium, France, Germany, the Netherlands and the UK, APL said in a press release.

"The IP2 service promises an enhanced India-Germany connectivity with its direct call at the port of Hamburg," said an APL spokeswoman. "The service also offers shippers an additional gateway into and out of the United Kingdom via London Gateway, complementing market access via Southampton and Felixstowe through APL's India Pakistan Express (IPE) service."

With IP2’s strategic port rotation at the transshipment hubs of Jeddah and Jebel Ali, shippers from the Middle East and Gulf regions can tap into APL’s global network at these relay ports for further connectivity to the vast European markets, she added.

"Beyond ocean transportation, shippers on the IP2 service can be assured of an optimal handling of outbound cargo from India through a network of inland container depots located across the country before heading for the ports of Mundra and Nhava Sheva," APL said.

The IP2 service will commence sailing from Jebel Ali on 1 April with the following port rotation: