The new South African Sharon Fruit season has started, with volumes expected to soar 36 per cent 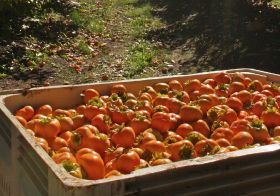 After a disappointing 2017, the South African Sharon fruit business is bouncing back in 2018. The first fruit was harvested at Buffeljagsrivier in the Southern Cape region of the country this morning (11 April) and it is expected that major shipments will be underway by the end of April.

This is a later start compared with last year but the industry expects a crop of exceptional quality. “In the Southern Cape we had enough rain and the dams and rivers supplying water to us are flowing strongly or are full,” says Hein Small of Sharon Fruit in South Africa.

Smal says the industry expects to harvest 36 per cent more fruit in 2018 compared to last year. “The crop is currently estimated at some 5,000 tonnes, compared with last year’s 3,200 tonnes. This means that the central packhouse, Arisa, will handle around 11,000 bins of fruit this year.”

With the first containers being shipped by the end of April, consumers in Europe and the UK will probably only receive significant volumes from mid-May onwards. “Our main marketing areas of the UK, Europe and Russia will be well supplied this year, but we will again also export volumes to the Middle East and the Far East, where interest in our fruit has been growing over the past few years,” says Smal.

He says that Sharon Fruit in South Africa will also resume its successful South African sales promotions this year. “Over the past few years we have been very successful in introducing Sharon fruit to greater numbers of South Africans and we are certain that we will see further growth this year.”

Internationally, the South African fruit will be sold this year for the first time under the new partnership between Greenyard and Mor International.

Fresh Produce giant Greenyard announced this week that it has acquired a 49 per cent stake in Mor International, the Israeli exotic fruit specialist, which started the Sharon fruit business in South Africa. Greenyard has labled this a highly significant move that underlines the potential many see to grow sales of products including avocados, mangoes, persimmons and pomegranates.

Mor International had a turnover of around €50m last year. The well-known fresh produce marketing executive, Meir Ben-Artzy, has since the exception of the South African business been the driving force behind the international sales and the highly successful South African marketing programme.

The South African sharon Fruit business has been developing since the middle of the 1990’s and has been consolidated over the past few years in regions that are best suited for growing the fruit. Both Arisa and Sharon Fruit in South Africa's farms are significant employers in what is a rural community far from the major centres.

Sharon fruit is shipped through the port of Cape Town and it is expected that some 200 containers will be shipped from there this season.