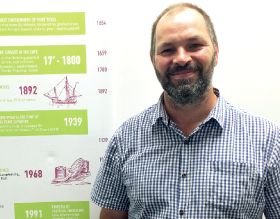 For a man who has just had to brief the UK Irrigation Association on the ongoing and increasingly difficult drought situation in South Africa, Professor Wiehann Steyn, the assistant general manager at Hortgro Science, appears remarkably upbeat when he sits down to talk to Fruitnet at his office in Stellenbosch. This is no façade, however, because as Steyn goes on to explain, the water situation – while far from ideal – has many positive aspects too.

“It is important to say that the drought does not mean doom and gloom, or that the industry is dying, or even that you should be looking for fruit from alternative sources because we won’t be able to produce it,” he says. “The central message is that drought is not a show-stopper, but a means of energising people to wake up and plan for a future with less water.”

Hortgro Science is the research engine of Hortgro, an offshoot that endeavours to provide industry stakeholders with the latest research and technology in the deciduous fruit industry. Steyn’s role is heading up R&D, ensuring the accuracy and relevance of any research. “We run three programmes, namely crop protection, crop production and postharvest,” Steyn outlines. “My programme is crop production, within which irrigation is one of our key themes.”

Steyn and his team are tasked with formulating a strategy to determine how much water deciduous plants require, crucial data that is important to have to hand when it comes to negotiating for things such as water allocation. This research also covers areas such as methods for reducing water loss, covering things like water saving under nets and the impact of over-irrigation. And given the drought situation of the past few years – and the predictions of a drier future globally – his work is more important than ever.

“Drought is cyclical, so in that sense we are definitely going to have wetter years again, but the long-term trend is for drier conditions,” he confirms. “Also consider the fact that the city of Cape Town is increasing in size – by 1 per cent per year over the past 20 years – so there will be increasing demand for water. We know the future will be one of less availability, so in terms of long-term planning, we have to become much more efficient with water. There are things you can do. For example, 24 per cent of our orchards are Golden Delicious and 17 per cent are Granny Smith – those two cultivars you can put nets over with no negative effects on quality, and that would be a considerable water saving. Another thing we could do is remove all invasive alien plants in the mountains, and this could increase water run-off by 30 per cent.

"The drought has also made people think more carefully about water use, according to Steyn. “The city of Cape Town can still do a lot more and, for that reason, perhaps the drought isn’t such a bad thing,” he says. “There is no way that the population five years ago would have agreed to a doubling of the water rates, no way they would have agreed to the building of desalinisation plants – but now they will. Everyone is thinking a bit more carefully about not only where water comes from, but where food comes from. At the beginning of the drought everyone was a bit less informed, people said ‘why can’t the agricultural industry use less water?’ – but now they think about where food is coming from, where will the jobs come from? So you have these good conversations starting and people get a bit more clued up about agriculture.”

If there is to be a competitive scramble for water in the future, how must orchards develop to maximise efficiency? Hortgro’s Orchard of the Future programme looks to answer the question of how to be sustainable in the long-term to ensure fruit is still being produced and is competitive on international markets. “The Orchard of the Future will have different looking trees, they will be thin and 2D so you have to spray less and they are easier to pick from, with all the fruit sitting on the same side to ensure consistency,” Steyn explains. “I think we will look at a big push towards drip irrigation and nets. Our production area is definitely going to be smaller, but are we going to produce less fruit? Probably not. Will we produce different fruits? Maybe, as the climate is changing so we can offer products like blueberries, figs, pomegranates and of course stonefruit, mixed in with pears and the lower chill apples.”

South Africa is not the first country to suffer from drought conditions, with agri-rich regions in developed nations such as Australia, Israel and the US having to manage with limited water in recent times. This expertise can be tapped into. “International cooperation has been happening a heck of a lot on things like orchard management, but certainly not on water,” Steyn confirms. “Now, we have a symposium in June and have invited a keynote speaker from Israel to attend, while the biggest drip irrigation company in South Africa, Netafim, is Israeli and I’ve been talking to them about the orchards of the future and how we can use their systems. It is bringing us closer, as shared knowledge will ultimately benefit us all.”