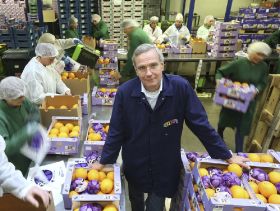 One of the Netherlands’ leading fresh produce importers has called on the Dutch government to abandon its plan to increase value-added tax on organic food and instead remove the charge altogether.

On behalf of 80,000 concerned citizens and 150 health food stores, Volkert Engelsman of Eosta/Nature & More handed over a petition demanding ‘No VAT on organic’ to the Dutch parliament.

“Consumers who buy organic products are saving the government and tax payers money,” he commented. “By lowering the VAT on organic, the government will create a more level playing field and encourage sustainable production.”

The petition invites the government to lower VAT on organic food to 0 per cent by the start of 2019 – instead of increasing it from 6 per cent to 9 per cent, as is the current plan.

Engelsman said there were “high hidden costs” associated with industrial agriculture that had not been factored in.

“The cost of water purification is very high as a result of all the pesticides leaking into it,” he observed. “Germany has lost 76 per cent of all its insects in the last 27 years. That indicates a collapse of the ecosystem.”

He added: “There are numerous other examples. Organic farmers have been showing for decades that they can grow food without glyphosate, neonics and other disastrous chemicals.”

In recent years, Eosta has invested considerable effort in a process known as True Cost Accounting, which aims to make the hidden costs of food production known and level the playing field as far as consumers are concerned.

In 2017, Engelsman headed up the Dutch Sustainable Top 100, a list of influential players compiled by newspaper Trouw.

Meanwhile, a recent report called True Cost Accounting for Food, Farming & Finance, commissioned by Eosta and produced by EY and Soil & More Impacts together with the FAO, showed that hidden costs of organic agriculture are lower than for non-organic production when considering their impact on climate, soil, water and health.