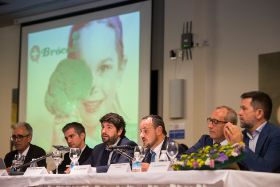 The campaign to promote the consumption of broccoli in Spain, + Broccoli, reached more than 10m consumers in the past year through retail and online promotions and the use of brand ambassadors.

The + Broccoli association, which brings together Spain’s biggest broccoli producers, presented the results of its latest campaign at its AGM in Torre Pacheco, Murcia this week.

President Luis Jiménez Moya praised the “huge effort” made to promote the consumption of broccoli, of which Spain is the number one European producer.

“This year we have taken the campaign forward in a very positive way and we have put broccoli on the tables of more and more people,” said Jiménez.

Highlighting the health benefits of broccoli under the slogan #meunoalverde (I’m joining the green), the promotion reached more than 1m people each month, according to Óscar Delgado of Soma Comunicación.

As well as undertaking promotions in more than 10,000 supermarkets and greengrocers throughout Spain, more than 100 influencers were recruited to promote broccoli consumption.

The campaign also featured actions aimed specifically at children, such as giving them the chance to win a ‘Brocolín’ cuddly toy.

“We are aware that the feeding of children has consequences for their future health, which is why we decided to make this special action for them,” said Jiménez.

Spain consumes around 66,000 tonnes of broccoli a year, with per capita consumption standing at around 1.5kg.