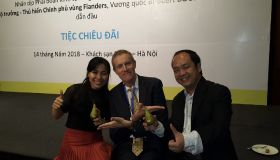 While commercial programmes won’t commence until later this year, the opportunity to unveil Belgian Conference pears in Vietnam earlier this week was simply too good to pass up.

Coinciding with Flemish Prime Minister Geert Bourgeois’ visit to Vietnam, a launch event was held in Hanoi on Monday (14 May).

With Bourgeois in attendance, representatives from leading Belgian cooperatives Belgian Fruit Valley (BFV) and BelOrta showcased their fruit to their import partners, retailers and local media. A ceremonial basket of Conference pears was also handed to Hoang Trung, the director of Vietnam’s Plant Protection Department (PPD).

Having already committed to sales programmes and market development in other parts of the world, Belgian pear exporters held off on sending fruit to Vietnam over the 2017/18 season, with an eye to entering the market with a full campaign in 2018/19.

“We wanted to wait for the start of the new season, which will begin in September,” explained Marc Evrard, commercial director of BFV. “Our ETA for the first shipment into Vietnam is mid-October.

“We decided to have a soft launch this week to coincided with the visit of our Flemish Prime Minister to Vietnam. It was too good of an opportunity to miss.”

While Evrard said the majority of end-consumers in Vietnam were not familiar with the Conference pear, there was a degree of awareness about the fruit at trade level.

“In the past we’ve had Vietnamese delegations coming to Belgium from all walks of life. People we’ve met from Vietnam through trade shows and exhibitions were all very enthusiastic about it,” he told Fruitnet.

The launch event also provided some favourable feedback that can be used when it comes to structuring marketing programmes.

“At the networking reception there were some pears on display and we had some pear tartlets prepared, but most of the visitors were eating conference pears on their own. Even though this is the end of the season, people still liked the flavour and taste.”

Evrard said an evolving modern retail segment provided the logical avenue to increasing awareness about Belgian Conference pears in Vietnam. He is encouraged by the opportunity at hand for BFV, who will sell fruit under the Truval brand through its import partner Unifarm.

“It’s going to take time to educate consumers and retailers about the possibilities of the product but Vietnam is a growing economy, with a population of roughly 90m people,” Evrard explained. “It’s a young population with a lot of potential. People have a lot of drive there to try new things, there’s a lot of enthusiasm which is really encouraging to see.”