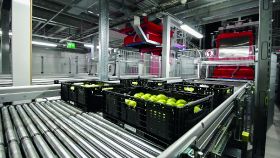 Finland’s largest retailer, S-Group, is aiming to distribute the majority of its fresh fruit and vegetable offer using returnable plastic crates (RPCs) within the next 12 months, according to information published by Ifco, one of the cooperative organisation’s logistics service providers,

Half of all the groceries sold in Finland now pass through a new, fully automated warehouse near Helsinki opened in mid-2017 by S-Group, which is also known as SOK, with Ifco responsible for supplying all of the RPCs used to move fresh produce through the facility.

By mid-2019, Ifco revealed, the retailer’s Inex Oy logistics subsidiary expects to be using a volume of 15m-16m RPCs per year for fruit and vegetables alone.

S-Group is understood to have increased the automated warehouse’s capacity to more than 1.2m units per day, with an estimated 21,000 different items now moving through the DC.

“Getting fresh fruit and vegetables from grower to grocer is a race against time,” said a spokesperson for Ifco. “Often, only hours may pass between produce arriving at the distribution centre and leaving again on its way to consumers.”

Each month, Ifco revealed, more than a million of its crates – described as “moisture-resistant, stackable and sturdy” – carry around 70 per cent of all fresh produce and bread products through the warehouse.

“The customer wanted to avoid the tilting of crates in particular,” explains Ifco chief executive Wolfgang Orgeldinger. “It was clear to them from the start that they need a high percentage of RPCs.”