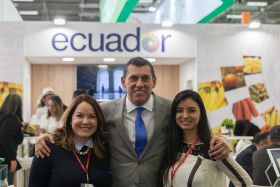 Ecuador is pursuing new trading opportunities as it seeks to expand its production and export of a range of non-traditional fruits and vegetables.

The election of Lenín Moreno as president in May 2017 marked a new chapter in the nation’s history. Moreno has a more pragmatic vision of the future about Ecuador’s future role on the world stage than his predecessor, Rafael Correa, which involves working hand in hand with the private sector to exploit the country’s full potential.

“We want to progress from being an exporter of commodities to an exporter of value-added products,” the country’s Minister for International Trade, Pablo Campana told Fruitnet during a recent trade visit to London.

“Ecuador has abundant water, fertile soils and a solid infrastructure. We need to make strategic alliances with countries that can provide the capital to help us achieve our potential.”

Following his election in April 2017, President Moreno introduced a raft of economic reforms to pare back the role of the state and promote private enterprise. Through a programme of public-private partnerships in key industries to generate foreign investment and exploit the country’s full potential.

With regard to agriculture, this means widening the country’s traditional export offer and improving market access. “Ecuador is seeking to position itself as a supplier not only of premium bananas, grown under internationally recognised environmental and social parameters, but of a wide range of non-traditional fruits that have all the international certifications needed to enter the various global markets,” says Roberto Intriago, executive director of trade promotion agency Proecuador.

In order to help it achieve this aim, Proecuador, is expanding its international network of trade offices – which now covers 26 countries – by opening a number of smaller, satellite offices in key markets.

“The aim is to open 11 this year – we’ve already opened offices in Cuba and Switzerland and aim to have 11 opened by the end of 2018, including in Poland, Hungary, Australia and Indonesia,” says Intriago.