Sun Pacific and Eurosemillas team up in China 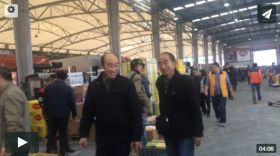 US grower-exporter Sun Pacific has forged an alliance with Spanish seed company Eurosemillas in order to supply the Chinese market with premium citrus and table grape varieties from the Northern and Southern Hemispheres.

The companies are putting together a team of local Chinese representatives with a view to opening an office in Shenzhen.

“Eurosemillas already has a branch in Beijing, which it set up ten years ago, and although China is no longer a new market for us, it is still very complicated to gain a foothold in the country – and even more so due to the recent trade war between the US and China,” said Victor Hao Wu.

“We already have a presence in Guangzhou, Shanghai and Hong Kong, and once we’ve consolidated our position in the rest of China we will look for new challenges in Southeast Asia.”

The companies supply wholesalers, supermarkets and the e-commerce sector. In the near future Hao believes that in the future, the supermarkets will increasingly dominate Chinese distribution to the detriment of the wholesale sector.