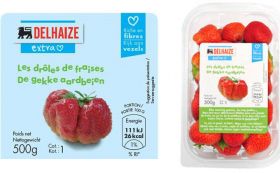 Belgian retailer Delhaize says it has saved no less than 530 tonnes of fresh fruit and vegetables that would previously not have conformed to strict appearance standards, following the introduction of its ‘Drôles de Fruits et Légumes’ (Funny Fruits and Vegetables) concept three years ago.

The group, which this summer introduced misshapen strawberries to the range, said it had already managed to rescue 140 tonnes of apples and 150 tonnes of pears since it launched the campaign.

The Drôles de Fraises strawberry offer appears to have resonated with shoppers too: the retailer said it had already sold 50,000 punnets of the wonky and exclusively Belgian fruit, equivalent to around 25 tonnes.

This year, its goal is to save 90 tonnes of strawberries, enabling producers to sell larger volumes as a result while also generating additional revenue.

“Delhaize has been fighting food waste for many years, not only by donating unsold products but also by ensuring that imperfect-looking produce still reaches consumers,” the company said in a statement.

“Every year, nearly a third of food production will not be consumed. A large proportion of the ‘misshapen produce’ is therefore not sold in the traditional food chain. And Delhaize tends to fix this by taking such action.”