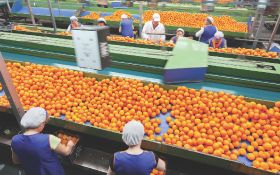 The Community of Valencia is expecting a citrus crop of 3.89m tonnes for 2018/19, an increase of 22.9 per cent compared to last season, according to the latest estimates.

Speaking at a press conference to present the forecast on Tuesday, the regional agriculture minister Elena Cebrián said the figure marked a return to normal following last season’s dramatic fall in production, which was due to alternate bearing and heavy rains at the end of 2016.

Reports suggest that this will be a high quality crop, following abundant flowering and a normal fruit set.

Growers said rains during August and the beginning of September, which in some areas have been accompanied by hail, have been beneficial to the crop, helping to ‘clean’ the trees, reducing the incidence of pests and diseases and increasing fruit sizes.

The minister said prices for the earliest varieties had been lower than anticipated due to fruit being somewhat smaller than expected, but that there was “no reason not to think that this will be a normal campaign”.

Agricultural unions described the conditions this season as “optimal” and said they hope that the high quality crop and a good balance between supply and demand would lead to a positive campaign.

This is the first time since 2009 that planted area in Valencia has not fallen, with overall acreage expected to remain stable.

This is partly due to growers switching from kaki production to citrus, particularly oranges, which have overtaken mandarins this year in terms of planted area.